skip to main | skip to sidebar

For the new year we've have decided to revamp the live set by throwing out some songs that we feel should be consigned to the bin marked 'Punk Nostalgia'. We are putting together a pool of live songs that reflect Alternative TV's entire career, not just the punk bit, which only lasted 2 years!
We are also starting work on a new studio album - at last! -which hopefully will be ready by the Spring. We will be recording at Kevin Mann's new studio. Yes, drummers can twiddle knobs as well as bash things.
One last thing, as I keep getting asked, the band line-up at the moment is:
Mark Perry - vocals, guitar/ Lee McFadden - guitar,vocals/ Steve Carter - bass guitar, vocals/ Kevin Mann - drums. Other people may help us out in the studio as guests.
Posted by Mark Perry at 04:51 8 comments:

I have added a couple of sites to my links list. The freeuk site is no longer updated but has an interesting news archive amongst other things. The Myspace page is being run by the current Alternative TV drummer, Kevin Mann. More links soon.
Posted by Mark Perry at 14:34 1 comment:

Hi, this is the new official blog page for anything to do with Mark Perry, Alternative TV, Sniffin' Glue fanzine and Sniffin' Glue Records. The freeuk site is no longer being used. I will be adding all the info you need to follow my career and access info on what I've done in the past. Speak to you again very soon.
Posted by Mark Perry at 14:11 2 comments: 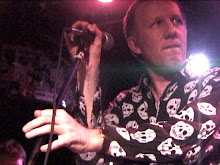 Mark Perry
Southsea, Hampshire
I was the editor of the Sniffin Glue punk fanzine - 1976/77. Since 1977 I have been singer, guitarist, song writer etc in Alternative TV. I have also played in the following other bands - the Good Missionaries, the Reflections, the Lemon Kittens, the Door and the Window, the Long Decline and Devotion.

Links to other related pages: